We have a little secret for you. Our team members have previously worked at places which carried millions of calls for Skype, Google Voice, Twilio and more. We’re all too familiar with poorly written APIs, slow number searches, DTMF problems, call quality issues, billing headaches and more. And based on our experience working at these firms, we’re committed to avoiding least cost routing, dialer and grey routes.

Based on Monday’s ruling by the FCC, we think this matters a lot. (Official document and details here.) We’ll explain why, but first, some background.

At least, that’s the idea.

Least cost routing (LCR) has evolved from simple strategies like the ones listed above to a massive market of buying, selling and trading minutes across a virtual black market. People input “rate decks” (or large lists of areas you can call which each have a different cost to call) into a computer from hundreds of different phone companies and shuttle around your calls based on whoever can honor the cheapest rate at that exact moment, for whatever reason.

The number of strategies is as complicated as the impact those strategies have. We’re only going to scratch the surface in this article of what happens in this market by talking about two items – rate blending and grey routes.

Some companies lower their rates by “blending” rates together. For example, let’s say a phone company named “Super Bell” can deliver calls to Iowa at a cost of $0.03/minute and calls to California at $0.01/minute. The average rate per minute is $0.02 if traffic was even, and that sounds like a pretty good rate to most consumers. Super Bell markets this as a “flat-rate” in hopes that more people will call California then Iowa. (which makes sense since California simply has a lot more people.) If that works out, they’ll make money, since most calls will cost less then they will charge you. But you, as the consumer, are always guaranteed $0.02, which is nice and simple to understand and sounds really cheap!

But, wait! Along comes Mega Call. This phone company promises rates that can’t be beat. How do they do this? They set up a fancy computer program that takes the really expensive phone calls that their customers are making to Iowa (which would cost them $0.03/minute normally) and they start sending all those calls to Super Bell who advertises the $0.02/minute blended rate. Mega Call does NOT send Super Bell the less-expensive traffic to California and instead keeps it for themselves, paying only $0.01/minute for those calls. So, now Mega Call can market their service at $0.02 (the same as Super Bell) but will never have a single call that loses them money because all their expensive calls went to the other guy! They’ve got themselves a guaranteed win.

Here’s the problem. This has all become very computerized with many, many companies participating in this behavior. The net effect is that some phone calls are literally bought and resold five times before the call is finally connected, so that people can provide you a cheap rate. In the process of doing so, sometimes calls get dropped, equipment fails or is incompatible with other equipment or call quality simply degrades. Some calls literally get bounced all the way from New York to California and back again even though you’re calling someone who’s just one state away. This inevitably impacts your call quality.

What’s a Grey Route?
In the above “blended rate” example we talked about how some companies gamble on flat-rate pricing with the expectation that the majority of calls will be to inexpensive areas and only a few calls to more expensive areas. But what happens when they’re wrong and they get mostly expensive calls instead of cheap ones?

Enter the Grey Route. The grey route is, literally, a sub-par phone line or phone company who is intentionally selling phone service in areas that should be expensive but is cutting corners to be able to provide the service for less. An example of a grey route, in it’s simplest form, might be someone buying 50 phone lines that were on special from the phone company for 6 months – and putting those phone lines in their garage. Then they buy an internet connection and funnel calls from the Internet to those cheap phone lines all day long. 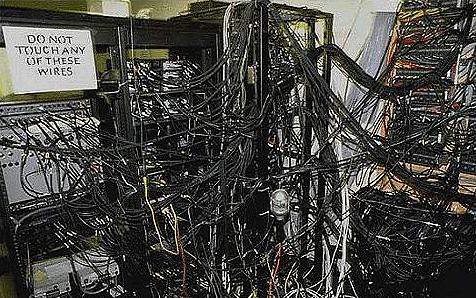 Well, what’s wrong with that?
First of all, the folks running the grey route don’t really care about the quality of the calls. They’re most likely using a poor quality internet connection, poor quality equipment and aren’t interested in debugging or fixing problems with their setup (like in the photo pictured above) – as long as they can keep you on the line long enough to bill the other party. How do they achieve that? They pitch the route to the phone company who’s losing money on expensive phone calls and falsely promise them great quality.

Remember that whole housing market scandal where people took poor-quality loans and bundled them with high-quality loans and marked the whole package as a “safe bet”? Well, that’s not the only industry playing this game.

In essence, the theory goes that if only 5% of your calls go over a “grey route” then phone companies can save literally millions of dollars and most customers will “tolerate” the poor quality because it only occurs on such a small number of calls. Unfortunately, the side effects of such behavior range from broken Caller ID and touchtone transmission to audio quality cut-outs and generally poor sounding calls.

What Does All This Mean? How Bad Has This Gotten?
Everything we just talked about comes down to a simple idea: as people are busy trading minutes to lower prices of making a call, they’re forgotten that there’s a human on the line who wants to make a call – and that’s you. A real, live, human being who just wants to call a loved one – or an emergency police department call. A call that’s important.

The problem of trading minutes resulting in poor quality phone calls has gotten so severe that the FCC has stepped in and, as of Monday, is threatening fines of up to $1.5 million for the worst offenders. While the FCC is trying to make a statement, it should be understood that such a large fine would only be utilized on companies like Verizon, AT&T, Vonage, Skype or others of that size who could actually pay that amount. In other words, the FCC is saying in no uncertain terms that it knows this problem goes “all the way to the top.”

Why We’re Proud of Our Services
Yup, pitch here. But for good reason. We spend a lot of time researching our carriers. A LOT of time. We don’t pretend to be a phone company who owns equipment – we resell other people’s minutes but we use our knowledge of providing quality service to decide who to use. We don’t tolerate grey routes and we insist on working with providers who have direct access to the folks we’re asking them to call.

2600hz is proud to have researched and selected carriers who:

2600hz is one of the only companies in the industry to openly promise direct routes. We are also one of the only companies that doesn’t touch the audio in your phone call with our wholesale services – we don’t even proxy it. We basically handle billing, contracts, E911, DID purchasing and inventory, porting and general management — and we pass the volume discounts to you.

In Conclusion
There is no such thing as a phone company that has equipment everywhere. No such company exists since the Ma Bell monopoly was divested. All companies – including Verizon, AT&T, Sprint, etc. all must work to integrate with each other and are allowed to service only certain areas of the country. This is a great thing as it encourages competition.