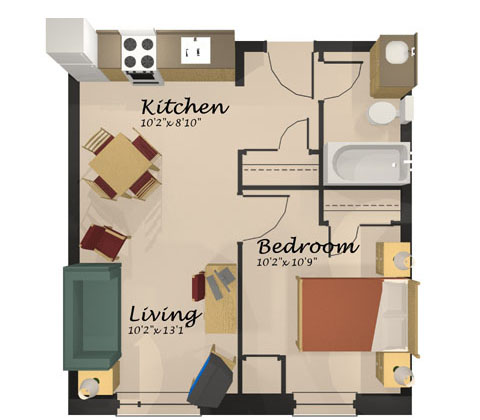 Every person who is far away from their parents for job should read this heart touching email!!!

ONE BEDROOM FLAT …
WRITTEN BY AN INDIAN ENGINEER …

I had acquired a degree in Engineering and joined a company based in USA, the land of braves and opportunity. When I arrived in the USA, it was as if a dream had come true.

Here at last I was in the place where I want to be. I decided I would be staying in this country for about Five years in which time I would have earned enough money to settle down in India.

My father was a government employee and after his retirement, the only asset he could acquire was a decent one bedroom flat.

I wanted to do something more than him. I started feeling homesick and lonely as the time passed. I used to call home and speak to my parents every week using cheap international phone cards. Two years passed, two years of Burgers at McDonald’s, pizzas, discos and watching the foreign exchange rate getting happy whenever the Rupee value went down.

Finally I decided to get married. I told my parents that I have only 10 days of holidays and everything must be done within these 10 days. I got my ticket booked in the cheapest flight. Was jubilant and was actually enjoying hopping for gifts for all my friends back home. If I miss anyone then there will be talks. After reaching home I spent one week going through all the photographs of girls and as the time was getting shorter I was forced to select one candidate.

In-laws told me, to my surprise, that I would have to get married in 2-3 days, as I will not get anymore holidays. After the marriage, it was time to return to USA, after giving some money to my parents and telling the neighbours to look after them, we returned to USA.

My wife enjoyed this country for about two months and then she started feeling lonely. The frequency of calling India increased to twice in a week sometimes 3 times a week. Our savings started diminishing.

After two more years we started to have kids. Two lovely kids, a boy and a girl. Every time I spoke to my parents, they asked me to come to India so that they can see their grand-children.

Every year I decide to go to India But part work and part monetary conditions prevented it. Years went by and visiting India was a distant dream. Then suddenly one day I got a message that my parents were seriously sick. I tried but I couldn’t get any holidays and thus could not go to India. The next message I got was my parents had passed away and as there was no one to do the last rites the society members had done whatever they could. I was depressed. My parents had passed away without seeing their grand children.

After couple more years passed away, much to my children’s dislike and my wife’s joy we returned to India to settle down. I started to look for a suitable property, but to my dismay my savings were short and the property prices had gone up during all these years. I had to return to the USA.

My wife refused to come back with me and my children refused to stay in India. My 2 children and I returned to USA after promising my wife I would be back for good after two years.

Time passed by, my daughter decided to get married to an American and my son was happy living in USA. I decided that had enough and wound-up everything and returned to India. I had just enough money to buy a decent 02 bedroom flat in a well-developed locality.

Now I am 60 years old and the only time I go out of the flat is for the routine visit to the nearby temple. My faithful wife has also left me and gone to the holy abode.

Sometimes I wondered was it worth all this?

My father, even after staying in India,

Had a house to his name and I too have the same nothing more.

I lost my parents and children for just ONE EXTRA BEDROOM.

Looking out from the window, I see a lot of children dancing. This damned cable TV has spoiled our new generation and these children are losing their values and culture because of it. I get occasional cards from my children asking I am alright. Well at least they remember me.

Now perhaps after I die it will be the neighbours again who will be performing my last rights, God Bless them.

But the question still remains ‘was all this worth it?’

IS IT JUST FOR ONE EXTRA BEDROOM???

LIFE IS BEYOND THIS ..DON’T JUST LEAVE YOUR LIFE ..

LIVE IT AS YOU WANT IT TO BE