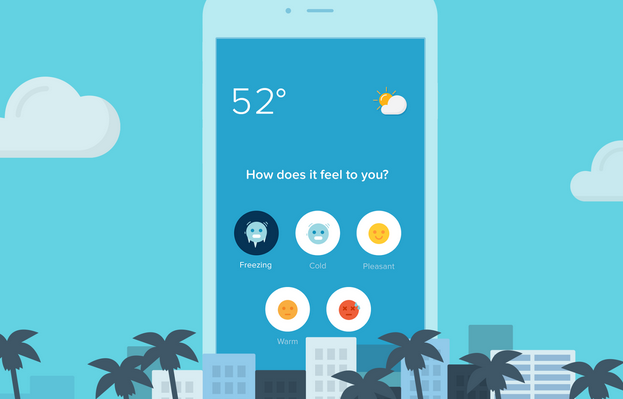 In a bid to stand out in the bustling weather app crowd, crowdsourced app Sunshine is adding a new personalization feature — giving users the ability to specify how hot or cold the weather feels to them.

The app then uses these subjective taps — on a super simple scale of “freezing” through to “hot”  — to learn each user’s temperature preferences and serve up more relevant weather reports to them.

“60-degrees isn’t a one-size-fits-all temperature,” says co-founder and CEO Katerina Stroponiati. “For some, it might as well be the Arctic tundra. For others it’s shorts weather. So when it’s 60-degrees outside, how do you know if it’s sweater 60-degrees or flip-flops 60-degrees?”

“Sunshine learns about you — like what’s cold or hot for you. It also learns every time you actively report to the community on sky conditions and hazards, translating this information into weather predictions,” she adds.

Sunshine only launched last October, with a stated mission of humanizing a data-heavy app category with something a little more consumer friendly.

Not that they’re the first with the idea of making weather apps more usefully practical, though. Swackett, for example, has been offering weather-based clothes suggestions for years, while in the “easier on the eye” category there’s the likes of Beautiful Weather (heavy on the cutesy animations) or YoWindow, to name but two.

Why is weather such a well-ploughed app furrow? Because a worthy weather app has the potential to earn one of the more well-thumbed places on a smartphone users’ home screen (versus being siloed away in a forgotten folder).

“Weather is context to many things, from clothing to eating and traveling,” says Stroponiati, discussing how Sunshine might look to monetize its free app future. “There are tons of brands that are related with this field and are interested in getting promoted in Sunshine. Having said that, we won’t put any banners or intrusive ads in the app. Our first goal is to be the most exciting app out there without pushing to our users stuff out of context.”

Sunshine is likewise pulling data from phone sensors to power its reports, but is also encouraging users to make direct weather reports themselves — hence, it self-bills as the “Waze of Weather.”

The v0.7 update, which is rolling out today, adds more conditions users can report, such as hazards, as well as the ability for people to report multiple conditions at once.

It also adds the ability for users to file anonymous weather reports. “It was something that users highly requested,” confirms Stroponiati. “Users love to contribute, help each other by making reports, be social and feel part of the community but at the same time they want to keep their privacy.”

Another new feature in v0.7 is the ability for users to be alerted an hour before rain/snow is expected in their area.

Sunshine is not disclosing how many users it has at this early stage, so it’s impossible to say how large is its community — but it will say users have created a total of 1.1 million weather reports since launch last fall. The app is currently live in the U.S. and Canada, and only on iOS for now.

Stroponiati also says Sunshine users make between 10,000 and 15,000 reports per day, with the number almost doubling when it’s raining or snowing in major cities. (Let’s call that the #snow effect.)

Interestingly, Sunshine’s early users are skewing younger, with 70 percent being aged 14 to 24-years-old. A sizable majority (65 percent) are also women. Stroponiati says Sunshine plans to double-down on its early popularity with teens/college kids — with the update set to be badged with the description “not your parents’ weather app.”

“The reason Sunshine appeals to a young audience is because there a huge gap that we discovered by analyzing our user interviews. We were excited when we discovered during the interviews that we made at colleges (UC Berkeley, UCLA, etc.) that school and college students are checking weather DAILY to figure out quickly what to wear in the morning or when it’s good time to go out and play,” she says. “At the same time, most of the young people cannot engage with the utility nature of weather apps out there. They want something fun more engaging and personal.”