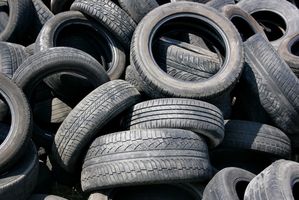 IFW Recycling Corporation sees a clear opportunity in the polluted skies by introducing reusable clean energy. According to CNN, inhabitants of Beijing are “choking as smog levels hit heavy or even worse levels.” Ironically, China is simultaneously one of the world’s biggest contributors to environmental pollution and largest producers of green & clean energy technology. Unfortunately for China, most of that technology is exported.

As pollution problems continue to worsen, governments around the world are looking for any solution to solve their waste management problems. This is particularly true in countries like China that rely on coal fired plants to generate electricity. The problem of air pollution is becoming critical to the health of the population and driving investments to clean up the air, water and land.

Wikipedia states that every year, over 260 million used tires end up in landfills across the world. In addition to the space they consume in the landfill, the tires contaminate groundwater and create toxic clouds of black grime when they ignite. Some jurisdictions purposely burn the tires in an effort to generate electricity.

The problems associated with used tires have been accumulating for decades. According to Infohouse.com, over 75 percent of used tires end up in landfills every year. These tires are seen by most as an ever expanding problem, but to IFW Recycling Corporation these tires represent a clean, green and efficient source of fuel.

IFW Recycling Corporation produces usable diesel fuel by gasifying the tires, while creating zero pollution and using 100 percent of the by-product (ash, carbon black and distilled water) all with staggering revenue, cash flow and profit results. Not only does the process remove the tires from being discarded as waste, the resulting products can be used by industry.

Tires are difficult to dispose of because they don’t easily break down to become anything useful. Tires can be recycled for use on basketball courts and new shoe products. The material recovered from disposed tires, called “crumb,” is generally only used as a low-cost mixing material. It is rarely used in large volumes.

Up to now, any effort to recover the raw constituents used to create tires has been inefficient, as more fuel is needed to recycle the tire than is used to make a new one. There has been progress in converting the refuse and using old tires as raw ingredients for new construction materials. However, the best solution may be to burn the tires and extract the residue from them.

Tires as Fuel for Clean Energy

The Environmental Protection Agency EPA, on their website, says, “The use of tire-derived fuels is a viable alternative to the use of fossil fuels.”

The report goes on to say, “Tires deliver 25 percent more energy than coal, with an emission profile of greenhouse gases and other pollutants that is about the same, making them acceptable as an industrial fuel.”

The innovators at IFW Recycling Corporation have taken this technology to another level. The company has created a way to recycle tires called Direct Slow Pyrolysis, 2nd generation DSP2™. Pyrolysis is a thermochemical decomposition of organic material at elevated temperatures in the absence of oxygen. This process breaks down the tires into its usable base materials for clean energy.

The DSP2™ process differs from other similar though inferior technologies by producing zero emissions while creating highly a marketable commodity. Furthermore, their re-engineered and fine-tuned DSP2™ process has addressed and eliminated the inefficiencies and inadequacies of other pyrolysis methods.

IFW Recycling Corporation does more than just burn the tires for fuel for clean energy. The DSP2™ process breaks down the tires and creates usable diesel fuel as a byproduct of the recycling. This creates a cleaner source of fuel that can be used to power the recycling equipment or sold as a separate revenue generator.

This fuel is in addition to the ash, carbon black and distilled water that are created from the slow controlled decomposition of the used tires. The resulting products add an additional stream of revenue and power generation in addition to cleaning up the toxic mess that accumulates in landfills.

Because the new technology from IFW Recycling Corporation results in zero emissions the process is ideal for countries and cities that have air quality problems. In particular, a city such as Beijing would benefit from replacing coal fired electricity generation with green zero emission energy production.

The rise of China as an economic power has resulted in smog and pollution levels that are threatening the health of the people living in industrial cities. In Shijiazhuang the largest city in China’s Hebei province, levels of tiny particles called reached 575 parts per million, and the measure of larger particles hit 843 parts per million. Health authorities say 25 parts per million is the safe level for humans.

The disposal of tires, once a growing problem, could now be the source of clean, reusable power generation and profit. Companies like IFW Recycling Corporation are at the forefront of a whole new way of looking at green technology.

Gigafactory – How Tesla’s battery could change everything