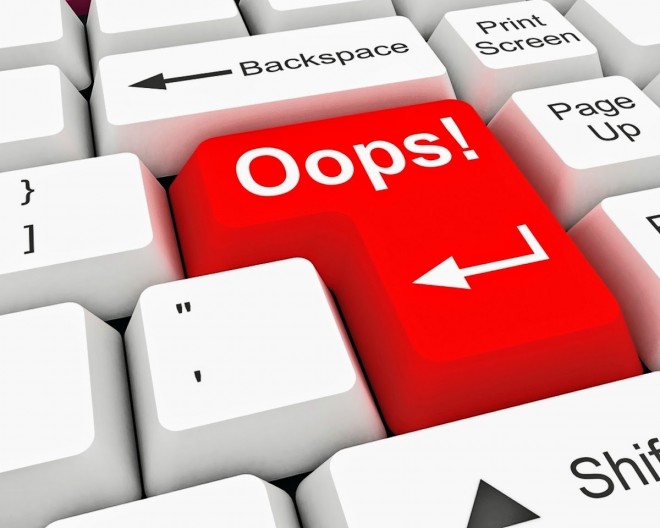 Just because Google’s “undo send” feature recently rolled out doesn’t mean you’re in the clear when it comes to email mistakes. After all, when you’re working as quickly as you do, it only makes sense that you’re going to slip up every now and again. Even if you’re a perfectionist.

In fact, there are a few things that all professionals end up doing at some point or another — in their careers (if not once a year). So, rather than panicking, just follow our lead.

1. Clicking send before you’re supposed to

It’s hard to stay calm after you accidentally send someone half an email — especially when you planned to revise because it’s filled with typos, excessive exclamation marks, and some wording that can easily by misconstrued.

But don’t spend the next 10 minutes researching email-tracking apps to see whether your recipient has opened the message. Instead, finish the original email quickly (you no longer have the luxury of spending several minutes editing it), and write the following at the top:

I made the mistake of clicking send before finishing the email, so please disregard the previous one. Sorry for the confusion!

This mistake comes in two scenarios: One, you send something that’s not confidential, but not exactly meant for everyone to read — such as an email to your boss about vacation time. Or two, you send the whole company a snarky comment about a colleague that was only meant for a close friend to see.

For the first scenario, try:

Hi [group you replied all to],

Whoops — that was intended for [original recipient]. I apologize for clogging up your inbox!

And for the second scenario, go with:

Sorry for clogging up your inbox! I’m sure that email’s easily misconstrued out of context — please disregard it.

Sending that out is a start, but you’re not off the hook, yet. This isn’t a casual slip-up that can be so easily fixed. Approach whomever it is that you offended in person (or over the phone), and apologize — no matter how uncomfortable it is. Then, read this for a step-by-step approach on how to recover from this type of more serious work mistake.

Most typos don’t require a follow-up note, but we’ve all stumbled upon those cringeworthy ones that require an explanation. Maybe the typo changes the meaning of what you’re actually trying to say. Or, maybe there are so many that it just makes you look slightly illiterate.

Rather than hoping that your recipient will disregard the typo(s) as a mistake, tell him or her:

Wow, I meant to type [correctly spelled word(s)], not what I sent earlier! Here’s to doing spell check more often.

This error, again, comes in two different scenarios. Either you send a company-related message to Colleague Two instead of Colleague One, or you accidentally send sensitive information to someone outside the company.

For the first scenario, write:

I’m sorry, this email was written for someone else! I know you receive tons of messages, so feel free to delete this one.

The latter scenario is, of course, much more serious. Before you contact the incorrect recipient, own up to the consequences by letting your manager know what happened — and finding out just how sensitive the information you leaked was. Then, based on your higher-up’s instructions, apologize to the outside party, and politely ask him or her to delete your message.