You are probably well aware of the fact that many phone comes with a non-removable battery, which the phone doesn’t offer a away for you to  replace the battery and use a spare battery. The fact is that most people don’t carry nor they want to carry a second battery with them. I agree that having an option to do so is a good.  Some say that by removing the battery we are actually reducing the life span of the device due to dust entering the battery chamber and damage the phone and changing batteries reduce its lifespan.

I’ve read many negative opinions about the HTC One from people complaining about not having the option to replace the battery. Is it a big issue or not – in this article I want to present to you some of the advantages and disadvantages of each approach, and you’ll decide whether you are convinced or not.

Removable battery gives you convenience and in fact some people do carry an extra battery with them. There are options to extend the battery capacity even double it with a battery case. For example, you can use the Mophie Juice Pack for the HTC One ($99.95)  that doubles the battery lifeof the HTC One. As you know, the HTC One doesn’t have a removable battery and many people complained about it.  The disadvantage is that the cover thickens the phone profile. It’s not too bad though and a hard case with integrated rechargeable battery might be your best bet here.

Take a look at the next image and see the difference in size for yourself: 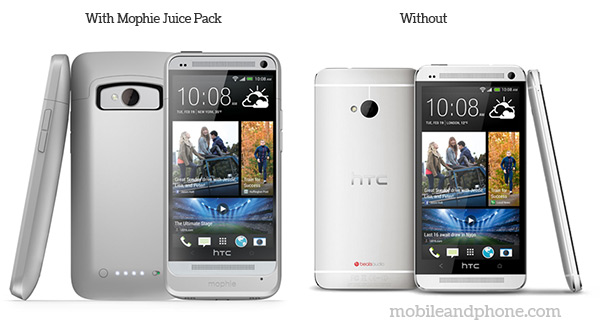 You can see that the battery case adds to the overall size of the phone quote a lot, but you get twice the battery life  (HTC One battery life) and I think that for some people that’s more important than aesthetics. The great thing is that you can still continue to charge and sync your phone via USB and the lens and LED flash visibility are not compromised in any way.

The you the truth, I never liked the flimsy back covers of my phone. I didn’t like when I drop the phone the cover detaches from the phone and I need to attach it again.  I also think that in some cases this helps protect the phone, especially if you dropped the phone accidentally in the sand or where there are lots of dust and other particles which can actually damage your phone if they get inside it.

No doubt that a unibody phone design looks better and I think that many people love it. A slick aluminum zero-gap aluminum phone looks and feels great in the hands. You’l have less parts that can break when you drop the phone, less gaps for dust to enter the phone itself.

It seems that most people aren’t convinced with that, and for them the cons outweigh the pros. The two most concerns are:

Some people the first thing that they do is to purchase a spare battery. Those battery are cheap so people don’t mind buying a second battery. In case that the first one is out, you can easily put the second battery and continue using your phone. Great when you are on the move and far away from a place where you can charge your phone. It’s worth mentioning that with phones with removable battery you also have the option to use an extended large-capacity battery with a dedicated cover. For example, you can purchase the Hyperion Samsung Galaxy S4 5200 mAh extended battery + black back cover for only $17.99 on Amazon. A cheap and effective solution to extend your phone’s battery life.

The advantages of having a removable battery/cover?

Some people are carrying a battery bank with them so the can charger their phone on the go. Take the  EasyAcc 12000mAh 2 USB external battery pack charger power bank . It’s a universal power pack comes with either two or four USB ports, so you can charge even several devices at the same time. It’s compatible with the Apple iPad Mini, iPad 4 2 2, Android tablets, iPhone 5/4S/4/3Gs, Samsung Galaxy S4 / S3, S2, Blackberry devices, cameras, MP4 players, you name it. For a price of around $40, you just can’t go wrong.  According to the manufacturer, it will supply about 600%~%700 of iPhone 4 battery life and 200%~250 of Google Nexus 7 battery life. It’s the perfect companion for a long flight, when traveling on a bus or whenever you need that extra power to last all day long on heavy multimedia and wireless usage.

So you can see that there are very affordable options out there.  The most easiest, more convenient and cost effective option is to have a phone with a removable battery/cover. All you have to do is to buy a cheap spare battery and get it over with. For most people this will be more than enough. People don’t like buying a phone and be worries about what happens in the future. They want to rest assured that they phone’s battery will continue to operate at high capacity and offer optimal performance even after a few months after purchasing the device.

Even more than that, at some point in time you might consider selling your phone in second hand website. Having a non-removable battery might make those phones less attractive for buyers that are searching to buy a second hand phone. Regarding the HTC One, I still didn’t find an official answer whether it’s possible to send the phone to the official lab for battery replacement or not. If you have that information, please comment below.

Remember, batteries wear out long before anything else on the phone. Some people don’t replace their phone every year and can hold it for even 3 to 4 years. For many people it’s easier to just get a phone with a removable battery and not worry about all this nonsense. Other people don’t mind or even prefer having a phone with a non-removable battery as they will upgrade to a newer model anyway after a year.

I also think that for businessmen, having a spare battery is the best option. When it comes to business, there are crucial times that you just can’t offer to be unavailable. I don’t know how it will effect the HTC One for people who use their phone for business, but that’s something to consider too I think.

Everyone of us makes its own choice. I think that most people prefer having a removable battery even with all those cons that I’ve mentioned. I personally have a phone with a removable battery that fell dozen of times, got dust in it and even after a mild abuse is still working perfectly fine and battery life is still in its best. So for me that’s some kind of evidence that maybe this all non-removable battery advantages just doesn’t stick (at least from my own experience).