Credits cards and debit cards have chips in them to ward off fraud. But Dynamics is introducing a new Wallet Card today that can run circles around that technology.

The Wallet Card has the support of a consortium of financial companies, including MasterCard, which led the last financing round for Pittsburgh, Pennsylvania-based Dynamics. The Wallet Card has a cell phone chip and most of the working parts of a computer, including a display — all inside a piece of plastic that looks like any other credit card.

Dynamics is showing the Wallet Card at CES 2018, the big tech trade show in Las Vegas this week. Jeff Mullen, founder and CEO of Dynamics, said in an interview that the new card will provide an “unprecedented level of security.”

“We have worked on this for over five years,” Mullen said. “We think it is a very disruptive platform.”

For instance, if you learn from the display on the card that the last purchase made on your card was fraudulent, you can request a new card from the bank and it will be issued on the spot, with proper authentication. You no longer have to call the bank to get a card reissued. Your new number account and card number are simply downloaded onto the card.

If you lose the card or report it stolen or forget your pin code, the bank can disable the card through the cell connection and send you a new card. Cards can be couriered to the consumer in a matter of hours, and the consumer can restore the wallet by downloading cards. The speed could reduce fraud losses and prevent purchase delays, Mullen said.

These are just some of the features that are possible on a card that’s connected and has digital processing capabilities.

Another is that you can now have multiple cards on one Wallet Card. Consumers can access their debit, credit, prepaid, multicurrency, one-time use, or loyalty cards on a single card with the tap of a button. When you get to a checkout stand, you could choose to pay with points or credit simply by pressing a button on the card.

It is also easily distributed. Banks can distribute Wallet Card anytime and anywhere — such as in their retail branches, during events, or even in-flight, and consumers can activate it immediately. Card information can then be downloaded through a secure, over-the-air cellular connection. At the same time, Mullen said the cards have built-in security in hardware elements.

And the technology could lead to tighter connections between consumers, issuers, and retailers. Messages can be sent to the Wallet Card at any time. For example, after every purchase, a message may be sent to notify the consumer of the purchase and of their remaining balance if they used a debit or loyalty card.

Consumers can be notified of a suspicious purchase and click on “Not me” to have a fraud alert set and a new card number issued. They can also receive coupons directly on their cards.

The Wallet Card has more than 200 internal components, and it’s the latest rendition of electronic credit and debit cards that Mullen and his team dreamed up at Carnegie Mellon University. He started the company in 2007, beginning a long journey to replace the mag stripe credit card, which has been in use since the 1970s and is fraught with all kinds of security risks.

The display has 65,000 pixels and a user interface that allows the card holder to change between different cards and informational screens. 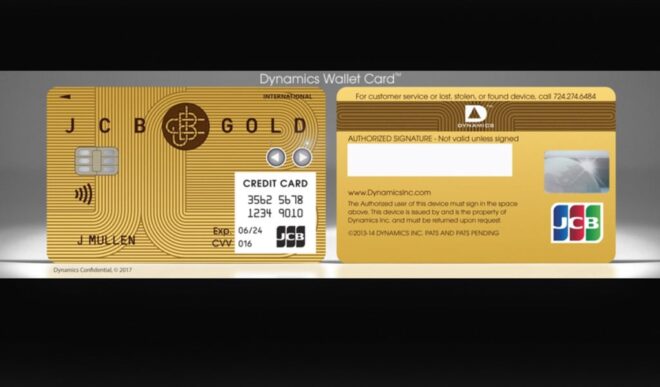 Dynamics has the support of the Wallet Card Consortium, which includes a number of big banks, payment networks, and carriers. Members include Visa, MasterCard, Sprint, and JCB (a Tokyo-based credit card company).

Dynamics has 100 employees and its own card manufacturing plants in Pittsburgh. The Wallet Card’s launch date is yet to be announced.