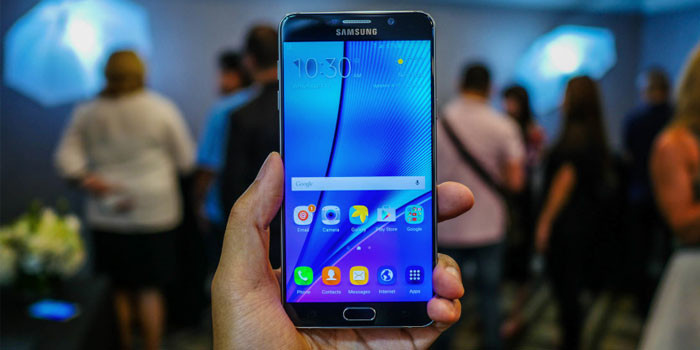 Samsung’s Note series has been second in popularity to perhaps only its flagship Galaxy series within Android. By incorporating features such as the S-Pen and Multi Window, it is one of the few companies which actually know how to make use of the extra screen-estate.

Now it is the time for the next iteration of the series, the Galaxy Note 5.

So what has changed this time, apart from being announced earlier than the previous versions? First thing to note is that the Note 5 borrows a lot from the S6 design language. The back more than anything else testifies to that, though, it is curved from the sides here for a better grip. The phone is just 7.6 mm thin and features lesser bezels by the display.

The display remains a 5.7” panel Super AMOLED Panel with QHD (2,560 x 1,440) resolution. The S-Pen has gained much more functionality, however. It finally makes use of the auto-eject mechanism, where you push the pen slightly to pop it out. You can also start scribbling even with the screen turned off, so as not to miss a moment.

Under the hood, the Note 5 makes use of the home-baked Exynos 7420 64-bit octa-core processor, which is undoubtedly the best chip on the market right now. Accompanying it is 4 GB worth RAM and either 32 or 64 GB internal storage (sorry no 128 GB version). There is no microSD card slot this time, proving this is a direction Samsung has finally chosen to take, but at least it is based on the faster UFS 2.0 standard, rather than eMMC 5.0.

Towards the back is a 16 megapixel camera with f/1.9 aperture, LED Flash, OIS and auto real-time HDR. Also a heart-rate sensor beneath the flash. It is capable of shooting 4K videos, a tradition started with the Note 3, as well as streaming 1080p to YouTube (whatever that is).

There is obviously the usual slew of image modes to go along. The front also has a 5 megapixel camera with f/1.9 aperture.

For connectivity, you get the Category 9 LTE with searing download/upload speeds of 450/50 Mbps. There’s new Bluetooth 4.2 LE, NFC, GPS and microUSB 2.0, too.

The Samsung phone also comes with support for Ultra High Quality Audio for a ‘richer’ audio. Another new feature is the Samsung Pay, which uses MST (magnetic secure transmission) or NFC for payments. The fingerprint scanner is made more secure for transactions.

Battery capacity is down from 3,220 mAh to 3,000 mAh. It is non-removable, just like the S6 but at least supports Fast Charging, not only via USB but also Wireless. The Note 5 will be available in Black Sapphire, White Pearl, Silver Titanium and, of course, Gold Platinum.

Pricing starts at $700 for the base 32 GB model. For that you’ll get a phone which knows how to make full use of its resources.