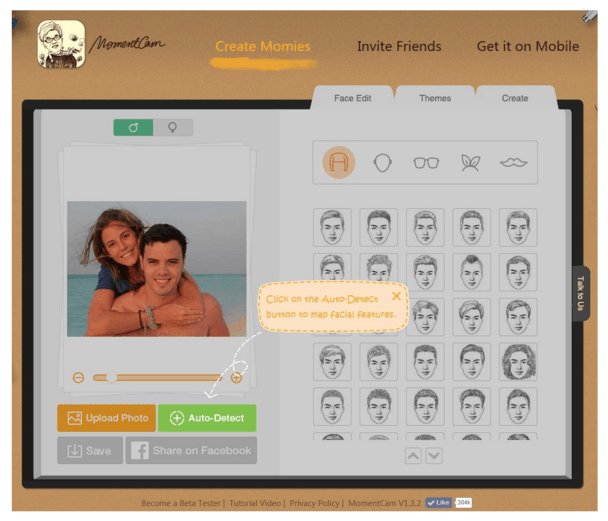 In 2014, Facebook launched an initiative aimed at giving assistance to local developers to help them produce applications that would have a beneficial impact on their community and region. Since that time, the company has provided $250 million in benefits. But what makes FbStart so effective? To answer that question, look to one of its supported startups.

At last year’s F8 developer conference, Facebook hailed MomentCam as a model example of FbStart. Deb Liu, Facebook’s vice president of platform, said in a statement: “We reviewed hundreds of applicants to find the ones with significant growth and retention, the best user experience and design, and the ability to build efficiently and at scale. We also looked for apps where Facebook’s developer platform was integral to the app’s success. MomentCam unanimously caught the attention of the judging committee for meeting this criteria, and for being an APAC-based developer that used Facebook to scale globally. MomentCam is one of the best examples of a China-based app that is performing well both locally and internationally.”

The Beijing, China-based company won the program’s inaugural competitionand received $50,000 in cash and $25,000 in Facebook Ad credit for its cartoon and caricature mobile app. The judges credited its growth, user engagement and experience, design, and ability to manage users and leverage the Facebook platform.

Hightalk Software, the makers of MomentCam, said that its app has been downloaded more than 300 million times since its launch in 2013 and now has 20 million monthly active users. At its peak, it had 3.25 million new activations in a single day.

Facebook has more than 1.55 billion monthly active users, so how can developers extend use of the social network? In MomentCam’s case, it deployed a suite of tools including Facebook Login, sharing, analytics, app invites and insights, app links, and integrations with Messenger — all separate modules of the core Facebook experience.

The viral effect of using an app with a Facebook tie-in certainly holds true; Hightalk Software said that its new user registration percentage increased by 20 percent after implementing Facebook Login. Moreover, the percentage of monthly active users in non-China markets (i.e. beyond China, Taiwan, Hong Kong, and Macau) jumped 150 percent after going all-in with Facebook. While these percentages may seem impressive, the exact numbers were not provided.

Beyond the simple Like button and the sharing capabilities, MomentCam seems to have taken advantage of Facebook’s app insights (also known as Analytics for Apps) and events features, particularly to understand how users engage with specific tools. In one situation, Hightalk Software wanted to know about performance of MomentCam’s Face Detection process — one of the most critical parts of the app, because if it fails, the whole enjoyment of using this service evaporates.

The app maker used App Events to determine which territories have greater and lesser success with the Face Detection Ratio. To determine why MomentCam wasn’t performing as well in Egypt, Hightalk began researching why it was the case: Was it because of language issues? Servers? Skin tones? The user interface? Or something else?

Upon investigating, the company discovered from its users that language and culture were playing a bigger role than they thought it would. The result led the company to add a tailored tutorial with examples and photos on how to use the face detection feature. In doing so, Hightail saw the fail ratio decrease by 20 percent for Arabic people.

Other Facebook tools used include Facebook Login. After MomentCam integrated this feature, it became the default login for many of its users. When users selected that login option, the company gave them the chance to participate in new activities, earn “Momie Beans,” and win exclusive cartoons. Hightail Software said that has resulted in “several hundred thousand new users” opting to use Facebook Login every month.

The app also ties back into Facebook Messenger, one of the leading chat services. Instead of pasting emojis or animated GIFs into your conversations with friends, why not make it more personal with an image from MomentCam? The app maker synced up with Messenger to allow people to quickly and easily create their own personalized and animated response before sharing it with their friends. Not surprisingly, MomentCam is a selected app featured within Messenger.

At the end of the day, is MomentCam the most innovative service in the world? No, but it has found success in capitalizing on the impact Facebook can have in spreading the word about your app.

With the resources from FbStart, Hightail Software said it was able to receive assistance in building better apps with Facebook’s portfolio of tools. The aim of the FbStart program is to provide the resources developers need to build not just an app, but one that is scalable and can easily be adjusted based on user needs. And for an app that turns photos (including selfies) into cartoons and caricatures, finding out how to modify an app so that it works not only in China, but also in the United States, Europe, Africa, and the rest of the world, can be an important thing.

fruits and vegetables benefits for health