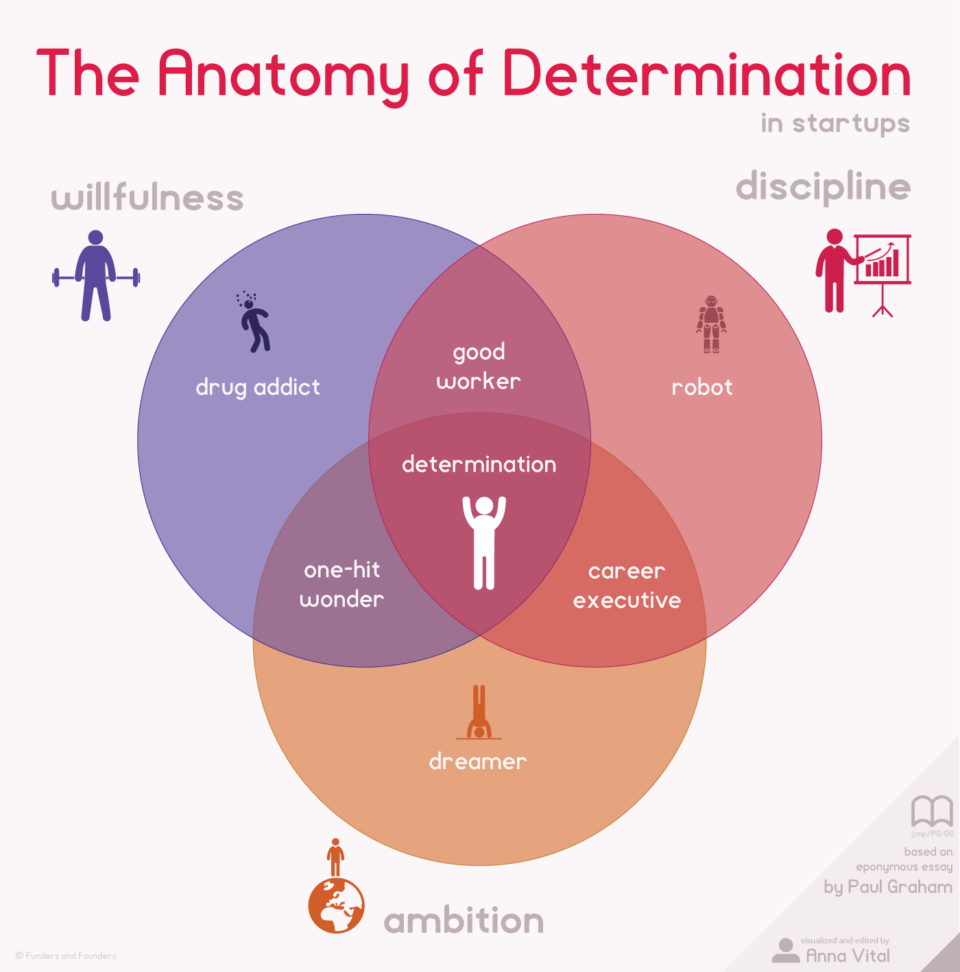 Determination, according to Paul Graham’s essay, is the best predictor of startup success. Determined people, he says, have three qualities: discipline, ambition, and willfulness.

Successful startups are extremely rare compared to the number of startups ever started. It means that at least one of these three qualities is rare in people. Which one? Let’s look at them one by one.

Discipline is simply doing what you’ve planned to do. It requires a plan, any plan, and your execution of it. Discipline is straightforward. So why would it ever be a problem? It is not difficult to make a plan. Most people get that far. But the doing part is more difficult – it requires something less than what we normally do – doing without reconsidering. You need to follow the plan without doubting the plan, at least for some time.

There are many reasons you could doubt your plan. It might be laziness in disguise, or you may genuinely doubt your ability to carry out the plan.
Another reason may be psychological – whatever you plan is is not what your body actually does. This last one is easy to see when you set several alarms to wake you up in the morning, still somehow your arms reach across the room to silence all the alarms so you can keep sleeping. Your body seems to have a mind of its own. Your feet don’t carry you to the gym when your head wants to go there.
The good news is that all of these are fixable.

If the problem is doubt, dig deeper and find exactly what kind of doubt this is. Do you doubt that you can get anything at all? If so, doing and finishing a quick-and-dirty prototype of anything takes care of that doubt.

Do you doubt that you can do anything well? Then start by doing something small but exceptionally well.

Laziness is unwillingness to work or use energy. Unwillingness is just a lack of desire. So if you have no desire to work and you don’t work, you can’t survive. Most likely this is not your case because you are still alive. You are working on something. Your laziness does not stop you.

Whatever the mental barriers to discipline may be, if you just want to be disciplined, you can simply be, like a robot executing instructions. You can write instructions for yourself and follow them each day. You can be disciplined on autopilot. In fact, it is easier to be disciplined when you turn off the analysis running in the background of your mind. Analyzing triggers doubts, but for discipline we want pure and unhindered execution.

Ambition is the grandness of what you want to achieve. Generation Y is famously ambitious. Being ambitious is relatively easy – just imagine the most you could achieve in a lifetime. Becoming the POTUS? Think bigger. It’s easy to become delusional about your potential grandeur. But you never get more than you ask for in life. Ambition is the ask. Asking is easier than doing. So for most us ambition is easier than discipline.

For people who are disciplined already the opposite may happen. They may be in a habit of assessing themselves all too realistically. The remedy for that is getting to know people who are above and beyond your current ambition level. Once you get to know them personally, you will see that they are no smarter than you. You will start thinking that you can achieve as much, or even more.

How can you make someone desire something? Marketers do this. They make things look better than they really are. Best of all, as a car dealer would do, they let you test drive your dream. Pretend it’s already yours.

In case of startups this is a problem. Who has the incentive to make startups sound better than they really are? Maybe some investors or incubators? No, they wouldn’t because they don’t want weak startups.

And who would let you test drive being the founder of a successful startup? You could work for one but it’s not the same as being the founder. No one would let you bear the load of responsibility a founder carries. Still, you could be a co-founder of one, and if you are, it will take years of your life to see it through. Dustin Moskovitz co-founded Facebook, but after 4 years he founded his own startup. He saw what it’s like to be a startup founder before he ventured out on his own. Still, that is a time consuming way to learn.

How can you get that extreme desire now? If a startup were a Mercedes then some people would desire to buy one after simply seeing one drive by, others would be talked into buying one by a car dealer, yet others would buy one because their father drives one. In other words desires come from experiences of different lengths and intensity. Are you the person who intensifies your own experience in life? Then probably just seeing a Mercedes drive by is enough for you.

But startups are not like a Mercedes because no startup is the same. A very successful one is unlike any that existed before. So your desire to build one would be similar to seeing a Mercedes drive by and visualizing how you will one day create a McLaren F1.

Last, you have to have fearlessness about the consequences of your desires. It is rational to fear the consequences of startup life. It is painful. But so is the alternative. Is it more painful to run a startup than to have a boss? Do you fear working 16-hour days more than feeling useless at your job? Fear is relative. The lesser of the fears wins.

Out of discipline, ambition, and willfulness the latter is probably the most difficult to acquire. It takes intensity of experience to want something to an extreme. People might call you “intense.” It takes courage to think even for a second that you can create what you want. It may take time to realize that whatever you fear about startups is more frightening if you don’t start one.

Networking – What is the Difference Between IPSec VPN and SSL VPN?